What's the climate impact of private jets at COP27? 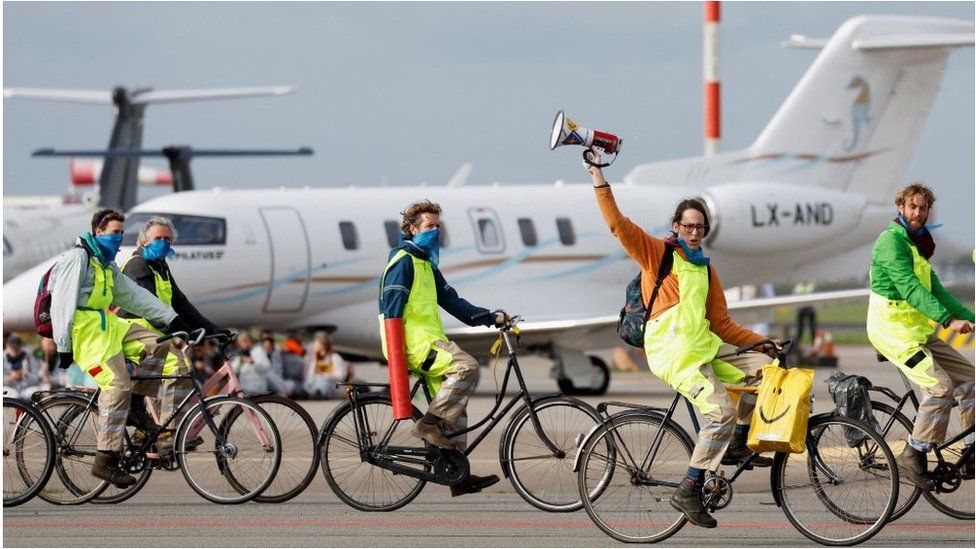 There has been criticism on social media of delegates arriving at the COP27 United Nations Climate Change Conference, in Sharm el-Sheikh, Egypt.

The day before the conference began, hundreds of environmental activists stopped private jets leaving Amsterdam's Schiphol Airport, by sitting in front of their wheels and riding around the airfield on bicycles.

How many private jets went to Sharm el-Sheikh?

Data from FlightRadar24 shows 36 private jets landed at Sharm el-Sheikh between 4 and 6 November, the start of the summit.

A further 64 flew into Cairo, 24 of which had come from Sharm el-Sheikh.

The COP27 website says delegates should use either airport.

Nine of the flights came from the United Kingdom, with others from European countries including Italy, France, and the Netherlands.

Two were from the US to Cairo - one from Atlanta and one from Washington DC.

FlightRadar24 says there may have been more scheduled private flights it was unable to track because of limited coverage in the area.

But fewer private jets appear to be flying to COP27 than COP26, in 2021, in Glasgow, - BBC Reality Check investigated their use at the time.

One of the reasons for this may be there have been fewer world leaders, so far, attending the Sharm el-Sheikh summit.

Emissions per kilometre travelled are significantly worse than any other form of transport.

This varies considerably depending on:

There are many different models of private jet but the one flown the most often into Egypt ahead of Cop27 was the Gulfstream G650, which uses about 500 gallons (1,893 litres) of fuel per hour.

If a private jet had managed to take off from Amsterdam - despite the demonstrations - it should have taken about five hours to reach Sharm el-Sheikh, using about 9,465 litres of aviation fuel.

The Department for Business, Energy and Industrial Strategy (BEIS) says 2.5kg (5.5lb) of CO2 is emitted for every litre of aviation turbine fuel burned. So this flight would produce 23.9 tonnes.

But to "capture the maximum climate impact" of flights, BEIS recommends, CO2 emissions figures should be multiplied by 1.9 - to reflect the non-CO2 emissions released by planes at high altitude, which, scientists say, increase the warming effect.

Therefore, the total emissions for this flight would be 45.3 tonnes of CO2 equivalent - and if the maximum capacity of 15 was filled, each passenger would be responsible for about three tonnes on their journey.

These emissions figures are estimates for the actual journeys - they do not include the emissions associated with making the private jets in the first place.

If our COP27 delegates had opted for a commercial flight from Amsterdam to Egypt, assuming they travelled premium class, their emissions would have been about half a tonne each, according to the International Civil Aviation Organization (ICAO) calculator.

Even though a commercial flight uses more fuel per hour, it can fly far more passengers than a private jet and therefore produces fewer emissions per person.

The UK prime minister and foreign secretary arrived in a government-leased Airbus A321-253NX.

That uses about 2.6 tonnes of fuel an hour, depending on factors such as the amount of cargo and the altitude.

Using the government's conversion factors, that means the flight to Sharm el-Sheikh will have emitted about 41 tonnes of CO2. Using the BEIS multiplier takes that to 78 tonnes of CO2 equivalent.

BBC News asked Downing Street how many other passengers were on the flight to Sharm el-Sheikh but No 10 would not say.

A government spokesperson said: "This delegation travelled on one of the most carbon-efficient planes of its size in the world and carbon emissions from these flights are also offset."

"The emissions are negligible compared to the impact of decisions and commitments made at these summits," he said.

"If you want emissions to come down, you want leaders in the room and media, scientists and stakeholders asking the important questions."

Correction: An earlier version of this story said that the prime minister travelled to Sharm el-Sheikh on an RAF Voyager, not an Airbus A321. The CO2 calculations have changed accordingly.