Wimbledon: How Russia’s war on Ukraine will affect world tennis

The usual trophies and prize money will be on the line for Novak Djokovic, Iga Swiatek and other top tennis players at Wimbledon, but there is a significant change there this year: No one will earn ranking points, a valuable currency in tennis, when play begins on June 27.

The women’s and men’s professional tours announced on Friday that they will not award ranking points to players at Wimbledon’s grass-court Grand Slam tournament because of the All England Club’s decision to bar players from Russia and Belarus over the war on Ukraine.

Both the Women’s Tennis Association (WTA) and Association of Tennis Professionals (ATP) said they were reacting to what they called “discrimination” against tennis players.

Here is a look at how this unprecedented move came about and what it means for Wimbledon and the world’s top tennis players:

Why did Wimbledon bar Russians and Belarusians?

The All England Club, which runs the oldest Grand Slam tournament  – Wimbledon was first held in 1877 – announced in April it would not allow players from Russia or Belarus to enter the event in 2022 because of the war in Ukraine.

Chief Executive Sally Bolton defended the club’s move as following a directive from the British government, and she cited a “responsibility to play our part in limiting the possibility of Wimbledon being used to justify the harm being done to others by the Russian regime”.

Have other sports banned Russian athletes?

Yes, including in football, where the Russian men’s team was kicked out of qualifying matches for this year’s World Cup. Figure skating and track and field are among the other sports to have taken action against Russian and Belarusian athletes.

In tennis, players from those countries have been allowed to compete – including at the French Open, the year’s second Grand Slam tournament, which begins on Sunday in Paris – but as “neutral” athletes who are not being identified by their nationalities.

Who can’t play at Wimbledon?

The most prominent Russian tennis player at the moment is Daniil Medvedev, who won the US Open last September and briefly reached number one in the men’s rankings this year. Andrey Rublev, who is ranked number seven in the ATP, is another top male player.

The WTA’s number seven, Aryna Sabalenka, who was a semi-finalist at Wimbledon a year ago, and former number one Victoria Azarenka, a two-time Australian Open champion, are from Belarus. 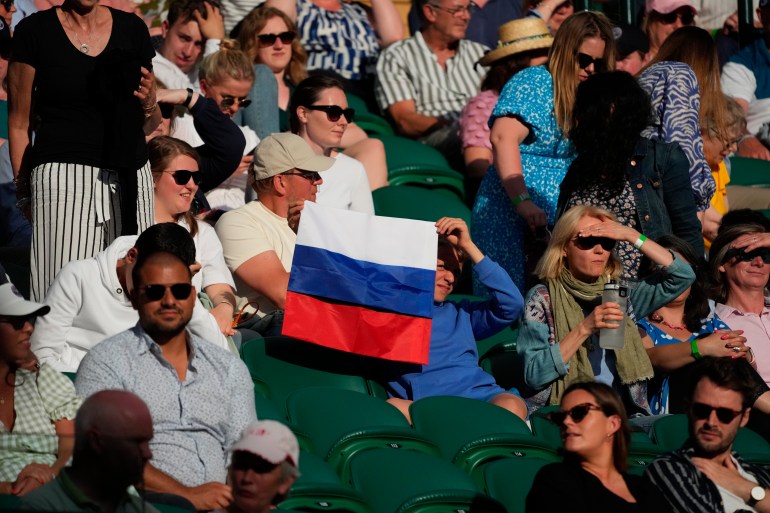 The WTA and ATP condemned the invasion of Ukraine, but said it was not fair for the All England Club to prevent certain players from playing because of the actions of their countries’ governments.

“Our rules and agreements exist in order to protect the rights of players as a whole,” the ATP said. “Unilateral decisions of this nature, if unaddressed, set a damaging precedent for the rest of the tour.”

The International Tennis Federation also withdrew its ranking points from the junior and wheelchair events at Wimbledon.

How do ranking points work? Why do they matter?

The WTA and ATP official rankings date to the early 1970s and currently are based on each player’s best results over the preceding 52 weeks; women count their top 16 tournaments, men their top 19.

Swiatek is the 28th woman to sit atop the WTA; Djokovic is one of 27 men to lead the ATP and has spent more weeks in that spot than anyone else.

Wimbledon and the three other Grand Slam tournaments award 2,000 points apiece to the women’s and men’s singles champions, more than any other events. In addition to other measures such as trophies or prize money, rankings are a way for fans, sponsors and others – including the players themselves – to understand where athletes stand in the sport’s hierarchy.

Technically, any tennis event that does not award ranking points is considered an exhibition.

Has this happened before?

Representatives of the ATP, WTA and ITF said they were unaware of any previous instances of rankings points being withheld from a tournament.

Will any players skip Wimbledon because there are no ranking points?

It is too soon to know, but even without ranking points, Wimbledon still offers plenty of prestige and millions of dollars in payouts.

“If you win it, I think you’d still be pretty happy,” said Jessica Pegula, an American seeded 11th at Roland Garros.

“But I think it’s just up to each individual person – how they’re feeling, their motivation.”

What will happen at the US open?

It is not yet known whether players from Russia or Belarus will be able to enter the US Open, the year’s last Grand Slam tournament, which begins in New York on August 29.

“We continue to monitor events”, US Tennis Association spokesman Chris Widmaier wrote in an email, “and are in active dialogue with the Ukraine and Russian/Belarusian players, the tours, the other Grand Slams, and other relevant parties”.