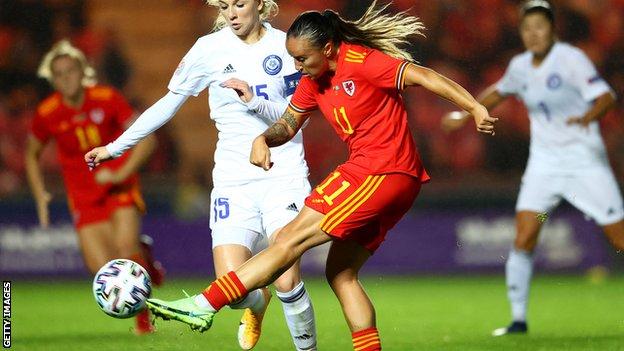 Kayleigh Green's excellent strike set Wales on their way before an equally fine finish from Natasha Harding doubled their lead.

It was an important win in Gemma Grainger's first competitive game in charge given Group I favourites France had beaten Greece 10-0 earlier in the day.

Grainger, appointed Jayne Ludlow's successor in March, believes her side can qualify for their first major finals and this opening win will have given her plenty of encouragement.

Hayley Ladd returned after injury kept her out of the June friendly against Scotland with Holland also coming into the team for her third cap.

They were up against Kazakhstan side ranked 82nd in the world and who had lost lost all eight of their Euro 2021 qualifying games.

Within the opening three minutes Wales had two opportunities with Natasha Harding's header from Holland's cross gathered comfortably by Irina Saratovtseva before Brighton's Green headed over.

Wales continued to dominate and only Saratovtseva's instinctive save kept out Gemma Evans' header from Rachel Rose's corner, with Jess Fishlock unable to take advantage of the rebound.

Saratovtseva managed to keep out Holland's deflected effort, but Wales did not have to wait long for their opening goal.

Bibigul Nurusheva failed to clear and Green picked up the ball on the edge of the box before Green's fierce shot on the turn left the keeper with no chance.

Harding's cross from the touchline forced Saratovtseva to tip the ball over the bar, but she could do nothing to stop the Reading forward from doubling Wales' lead before the half hour mark.

Captain Sophie Ingle provided the assist for Harding, who guided the ball past a helpless and stranded Saratovtseva with Wales completely in control.

Rowe was rewarded for her tireless work when she received the ball from Fishlock an unleashed a shot from 30 yards which extended the home side's lead.

But within a minute Green had scored her second of the evening - her 13th international goal - with a header from Rowe's cross.

Stoppage time headers from Evans and Holland sealed the win to give Wales an encouraging start to their qualifying campaign in what was not only Grainger's first competitive game as manager, but their first game in front of fans since the March 2020 win over Estonia in Wrexham.

Estonia, who lost 4-0 to Slovenia on Friday, will be Wales' next qualifying opponents as on Tuesday. 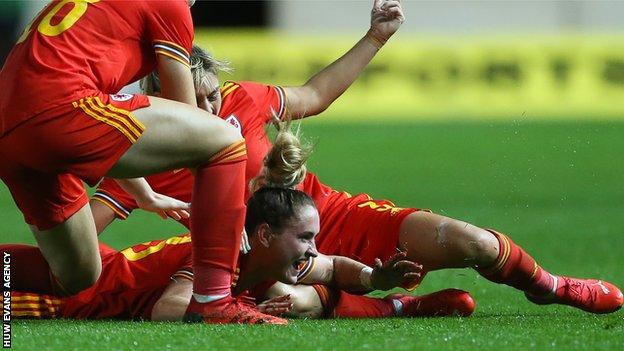 Scored a stunning long range goal and provided two assists as well as showing great movement on and off the ball.

Rachel Rowe (Wales Women) wins a free kick in the defensive half.

Attempt blocked. Carrie Jones (Wales Women) header from the centre of the box is blocked. Assisted by Esther Morgan with a cross.

Goal! Wales Women 6, Kazakhstan Women 0. Ceri Holland (Wales Women) header from the centre of the box to the high centre of the goal. Assisted by Megan Wynne with a cross.

Attempt blocked. Carrie Jones (Wales Women) right footed shot from the right side of the box is blocked. Assisted by Rachel Rowe.

Attempt saved. Jess Fishlock (Wales Women) right footed shot from the centre of the box is saved in the top left corner. Assisted by Rachel Rowe with a cross.

Rhiannon Roberts (Wales Women) wins a free kick in the attacking half.

OWNING IT: Reversing the trend of girls in Wales dropping out of sportSOCIAL MEDIA & SPORT: Vicki Blight investigates the impact of social media in sport