World Cup 2022 round of 16: Argentina vs Australia match preview

Can Argentina and Messi progress in the quest for a World Cup trophy?

Argentina are the hot favourites to beat Australia in pursuit of Lionel Messi’s dream of winning his first World Cup.

But they, more than anyone, have learned not to underestimate an underdog, especially the hard-battling Socceroos on Saturday.

Argentina suffered one of the biggest upsets in World Cup history with their opening defeat to Saudi Arabia but recovered their poise to swagger past Mexico and Poland into the last 16.

Australia, ranked 35 places below Argentina, have already surpassed expectations in winning twice to earn their place at Qatar’s Ahmad Bin Ali Stadium for one of the biggest games in their history. 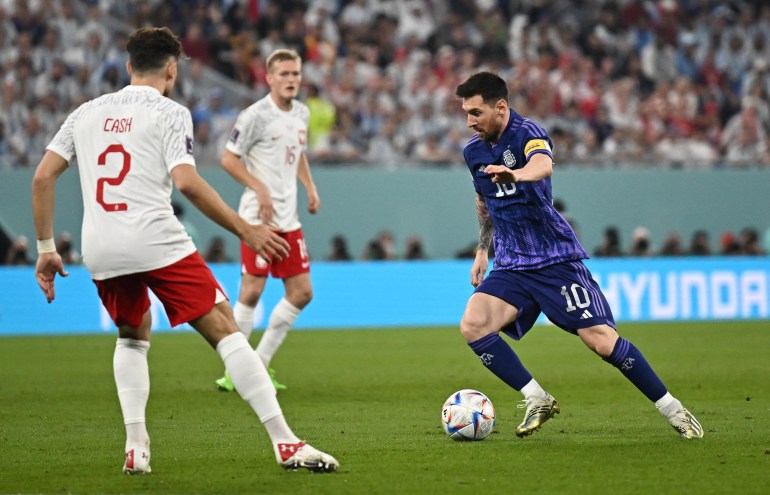 Overjoyed and exhausted after reaching the World Cup knockout stage for only the second time, Australia will have to play the game of their lives to overcome an Argentina side oozing talent from front to back.

They will be relying on the same fitness, muscle and never-say-die attitude that saw off Tunisia and Denmark, epitomised by hulking defender Harry Souttar, who has played out of his skin despite only just returning from a lengthy layoff.

“They are tough. Anyone who thinks the match against Australia will be easy is wrong,” Argentina’s Scaloni said.

His side will again be roared on by an enormous following as Argentines show themselves to be easily the loudest and possibly the largest fan base in Qatar.

Argentine striker Angel Di Maria was taken off as a precaution in their last game against Poland but should be fit to play alongside Messi again, though Scaloni has plenty of options to throw against the Australians.

Reaching the quarter-finals would be a dream for Australia, but for Argentina, it is a bare minimum national expectation as they seek a third World Cup trophy.

Messi, on his fifth and final quest to win the World Cup and match his great predecessor Diego Maradona in the number 10 shirt, is enjoying harmony with fans like never before and will be relishing the chance to delight them further against Australia