Watch How To Win The World Cup on BBC iPlayer from Friday, 4 November.

Players such as Cesc Fabregas, Xavi, Andres Iniesta, Per Mertesacker, Manuel Neuer and Marcel Desailly all give unique insights into their team's triumph.

We learn about how manager Luis Aragones revolutionised Spain by trusting in youth, how Joachim Low modelled his Germany team on Spain and how France's Didier Deschamps managed to control a dressing room full of stars.

You can watch the documentary on Sunday, 20 November at 22.30 GMT on BBC One.

Here are just a few takeaways.

1. "This is no longer a team that plays for one man" - Spain had to move on from Raul

Vicente del Bosque was the first manager to win a World Cup with Spain in 2010. He subsequently guided Spain to victory at the European Championship in 2012.

However, that road to success began under former manager, Aragones. He became Spain manager in 2004, following the humiliation of the European Championship in Portugal where the Spaniards failed to advance beyond the group stages.

At that point, Raul was Spain's main man and the national side's record goalscorer.

However, there were also a crop of young stars coming through the ranks, such as David Silva, Iniesta, David Villa and Fabregas. Spain had finished runners-up at both the 2003 Under-17 World Cup and the 2004 Under-17 European Championship. 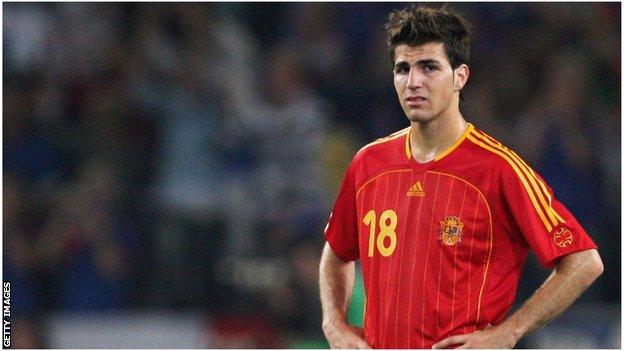 A 19-year-old Fabregas looks dejected as Spain are eliminated by France on the last 16 of the 2006 World Cup.

The future looked bright and Aragones opted for a change of the guard. In 2006, he made the controversial decision to drop 29-year-old Raul.

"Aragones said, 'Raul, you're out. This is no longer a team that plays for one man. This is a team that takes advantage of the wee men'."

Fabregas was one of Spain's brightest young prospects at the time. He was named best player at both the 2003 U17 World Cup and the 2004 U17 Euros. In 2006, he made his debut for the senior team and became the youngest Spanish player to participate in a World Cup when he came on against Ukraine, aged 19, during the tournament in Germany.

"Luis Aragones was a very, very special man," says Fabregas, of the legendary coach, who died in 2014. "He gave me, obviously, an opportunity at a very young age. He had a vision of the way he wanted to play, of the players he thought had the potential - Silva, Iniesta, myself, Sergio Ramos. I believe he was the start of something very special."

In 2008, Spain went on to win the European Championship under Aragones.

Iniesta played a massive role in bringing Spain their first World Cup trophy in 2010, famously scoring the winning goal during the final against the Netherlands.

However, privately, Iniesta had been struggling badly throughout the tournament and the months leading up.

An exceptionally gifted midfielder in an all-conquering Barcelona side - Iniesta's 2009-10 domestic season had been partly curtailed by injury. He was also, unbeknown to most of his teammates, suffering with depression.

Barcelona psychologist at the time, Inma Puig, suggests that the origins may have been the sudden death of Iniesta's friend, Dani Jarque - a defender for Espanyol who, in 2009, suffered a heart attack during a game, aged just 26.

After scoring Spain's winner in the final, Iniesta ripped off his shirt to reveal Jarque's name. 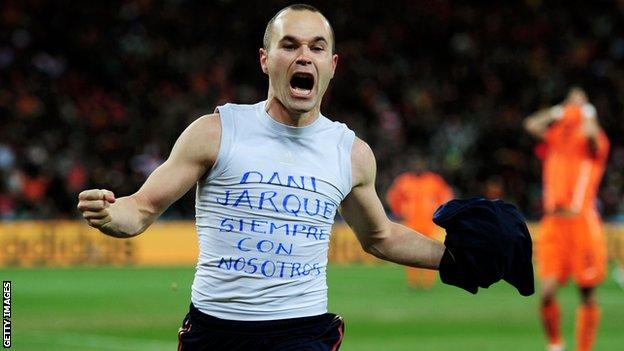 Iniesta chose the biggest moment of his career to pay tribute to his friend, Dani Jarque.

"The World Cup really saved my life," he says.

Fabregas says that there are lessons to be taken from his teammate's story.

"Sometimes we need to be a little more understanding that someone as successful as he is can still have his difficult moments."

3. "They were our role models" - Low modelled his Germany team on Spain

Germany finished runners-up to Aragones' Spain in the 2008 European Championship. They then had the misfortune to meet them again in the semi-finals of the 2010 World Cup - losing out once again.

"Spain at that time were mastering the ball, dominating possession. We couldn't handle it," says centre-back Mertesacker, who won 104 caps for Germany.

This was the Spain team who brought the style of tiki-taka football to the international stage.

German captain Neuer says that the team and their manager, Joachim Low, used Spain as a template for success going forward. 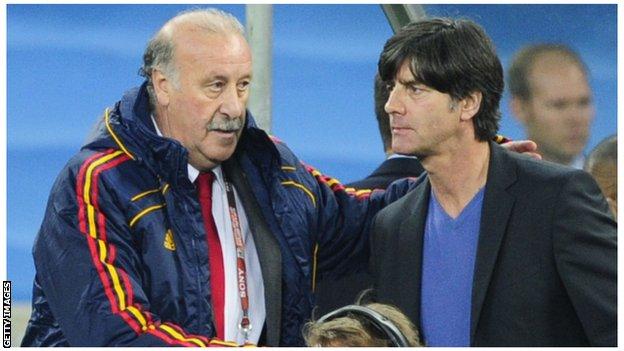 The master -Vicente del Bosque - and the apprentice - Joachim Low - as it were.

"They were among the best teams in the world at the time. It makes sense that you'd try to learn by watching the best and they were our role models."

As journalist Raphael Honigstein puts it: "Low's determination to become almost a Spain team becomes even stronger after 2010 and he develops a team that is totally possession-orientated."

The culmination of Low's philosophy came with victory at the 2014 World Cup in Brazil.

Throughout the 2014 World Cup, the German team stayed in a resort called Campo Bahia, in the north-east of Brazil.

During the film, players describe the special atmosphere they managed to create there.

Neuer also talks about a particular tradition that the boys kept on journeys back to camp. 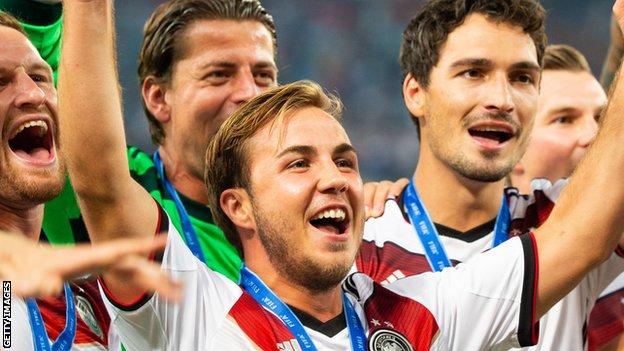 The 2014 World Cup was the culmination of a 10-year cycle for Germany.

"The trips back to Campo Bahia, they were really special because we always had a long journey," says the 36-year-old Bayern Munich keeper.

"We travelled on boat across a river and it took a while, so if a player had made his debut, they had to sing a song."

Although Neuer cannot recall the exact song, footage shown within the film reveals it to be 'When You Say Nothing at All' by Ronan Keating.

5. "If I lay into them, I might break something" - Deschamps and an incident with a fire extinguisher

As a player, Deschamps captained the French national side during their successful World Cup 1998 and Euro 2000 campaigns. At the 2018 World Cup in Russia, he guided France to their first major tournament win since then.

Players and associates in the film speak highly about Deschamps' ability to skilfully manage different characters in the dressing room, including stars like Paul Pogba and Kylian Mbappe. 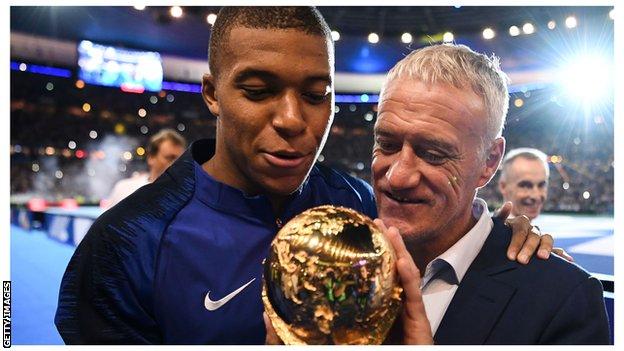 Deschamps, right, is described as being 'like a father figure' to Mbappe.

One story regarding some high jinks with a fire extinguisher, illustrates the manager's employment of the latter.

French journalist Julian Laurens sets the scene: After beating Argentina in the last 16, some players decided to go out celebrating.

"Adil Rami stays in his room and plays Fortnite in his pants," says Laurens.

Apparently, the players returned at 2am and took to banging on Rami's hotel room door.

"The smoke detector went off and woke up the whole hotel. And my room was next to Deschamps'. I thought he was going to tear them apart," says Tournon.

"We went downstairs and I saw Didier going to have a word with them. And with his sixth sense for relationships with the players, and the unity of the group, he said, 'if I lay into them, I might break something, we've been building for five or six weeks'. And so he arrived with a grin on his face and said, 'right, guys, time for bed, we'll talk about it tomorrow'."

"He's an ex-player," explains the former French captain, "We have done certain things that were borderline."