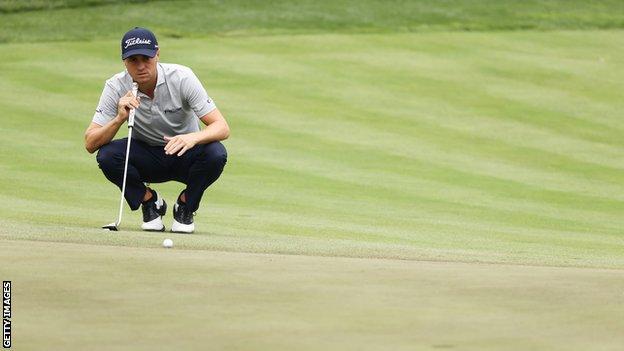 Justin Thomas, who is aiming for this third PGA Tour title of the year, has a one-shot lead to take into the weekend at the Zozo Championship in California.

After starting the day tied-second with England's Tyrrell Hatton, the American, 27, parred his opening hole before making four straight birdies.

The 2017 US PGA champion finished with a bogey-free 65 for a slender lead over Dylan Frittelli and Lanto Griffin.

Rory McIlroy and Tiger Woods are 10 and 12 shots off Thomas' lead respectively.

In-form Hatton - who won the BMW PGA Championship at Wentworth earlier this month - dropped a shot on the second but made five birdies in a 68 that leaves him three strokes behind Thomas.

"Got off to a hot start today and kind of coasted coming in," said Thomas, who has already won the Sentry Tournament of Champions and the WGC-FedEx St Jude Invitational this year.

"If you are getting the ball in play off the tee there are so many scoring clubs. You can attack it if you are really playing well."

South Africa's Frittelli and American Griffin both also posted seven-under rounds of 65 to lie 13 under overall.

Sebastian Munoz, who was leading after the first round, dropped back to equal-14th with a 70 due as a result of sloppy front nine in which he made two bogeys and a double bogey.

Woods' bid for a record-setting 83rd PGA Tour victory will have to wait after the defending champion finished 12 strokes off the lead and tied for 66th at the halfway point.

VIDEO: Players speak after falling to the Longhorns